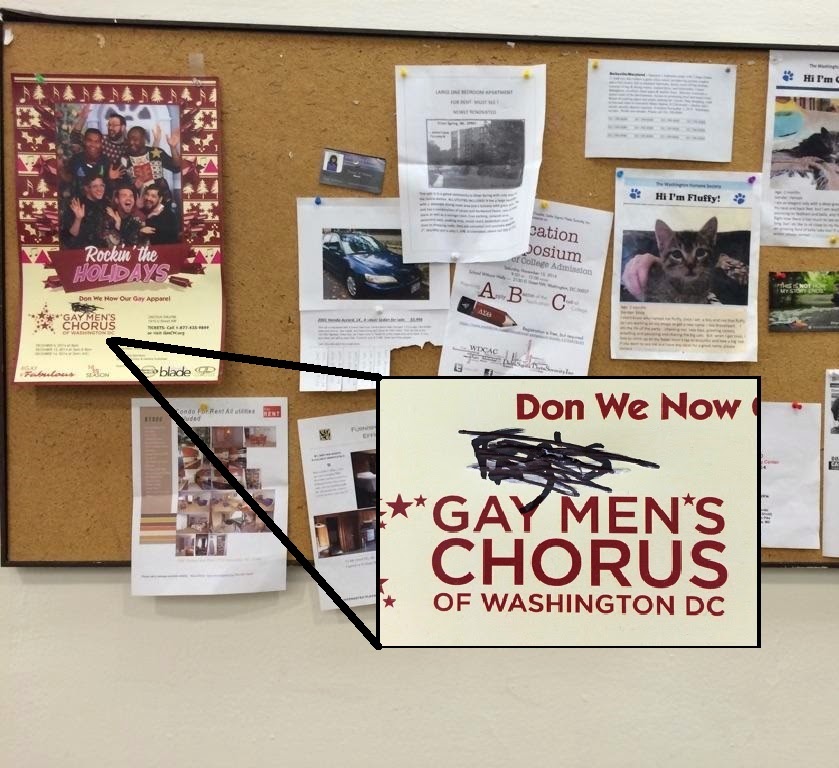 The word “fag’s,” written in black ink, is visible even after another passerby tried to correct it. The Gay Men’s Chorus routinely hangs posters all over Washington, and this is the first incident of its kind in recent memory according to Executive Director, Chase Maggiano.

“It’s really sad that in 2014 an adult could write with such inattention to detail.” Maggiano says. “Sometimes we hear stories like this on our local school visits, where grammar isn’t emphasized in the curriculum. But for a grown person, especially on Capitol Hill, to use redundant nouns, or worse, a misplaced apostrophe, is just really disheartening.”

It is unclear if the individual who defaced this poster meant to include the word “Fag’s” as part of the poster title, or was simply reiterating that the chorus is made up of gay men. If the former, then there seems to be an issue of redundancy. In the case of the latter, the appalling misuse of an apostrophe is an anomaly for Washington, which was recently ranked the most literate city in the country for the fourth year in a row.

However, according to the U.S. Department of Education, the adult literacy rate in America has not changed in 10 years. It is possible that this oversight was committed by a visitor to the Nation’s Capitol, but that cannot be confirmed until security footage is analyzed.

“Educated and driven people come to DC from all over the country to work for justice,” says Daniel Penchina, President of Q Street, an association of LGBT lobbyists and advocates. “This random act of illiteracy is not representative of the Capitol Hill community of staff and lawmakers. While we sometimes disagree on social issues, we do so with proper grammar.”


“This incident has really woken us up to a new reality,” exclaims Maggiano. “Going forward, the Gay Men’s Chorus will offer free daily tutoring and include a free thesaurus with all ticket purchases. These programs and benefits are open to all.”
Posted by Chase at 5:04 PM