Our third day in Cuba encompassed the most aggressive schedule, a triple header with concerts in the morning, afternoon and evening. After going for a run outside and experiencing the diesel-filled air (I won't be running a marathon here anytime soon), we went to the Cuban Institute of Friendship for a presentation on Cuba's history and relationship with the US. The presenters acknowledged imperfections in the social project as they call it, and made clear that there is room for growth in Cuba. We also had a conversation about gender equality, and I was surprised to learn that 44% of the Cuban Parliament members are women. 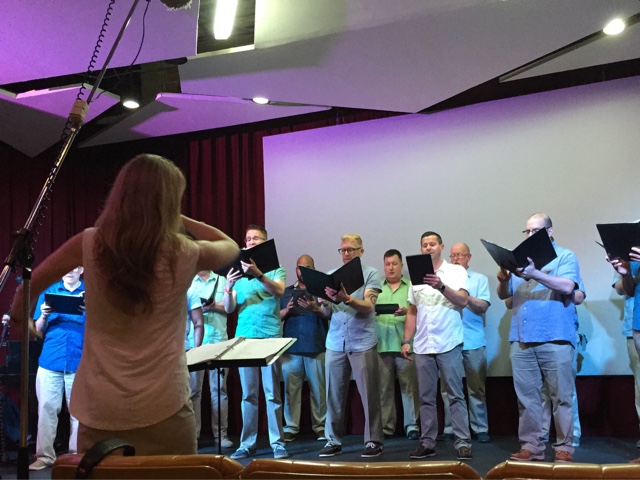 Next we went to the National Library of Cuba, one of the most important cultural and historical institutions, for a performance. Afterwards, we spent time asking and answering questions with the audience. A gay Cuban asked us about organizing as a gay community in the US, and wanted to understand how our groups are formed and founded. After explaining to him the structure and processes of our organization - he became more impassioned and asked "now that you have marriage equality, when was it that you finally felt heard by the majority?" I think what he may have really been asking is "how can I be heard?"
Again, a pin drop moment, because we had just finished singing "Make Them Hear You" in Spanish. I explained to him and the audience that in many places in the US, LGBTQ people can still be fired from jobs, and that's just one example of the rights we still lack. There was an audible gasp in the audience and I truly believe they were surprised to hear that the struggle for real equality is still alive back home.
Earlier in the concert, our Artistic Director Thea Kano had asked someone from the audience to hold a rainbow flag while GMCW sang Over the Rainbow. It was this same man who asked the question, and we learned from him after the concert that he has never had a rainbow flag before (the sale of them is not permitted in Cuba). He was near tears asking if he could keep it. After today we have one less flag and one new friend.
Another audience member told us he had been waiting for a moment like this in the country he loves neary his whole life. And there was acknowledgement throughout the room that it is because we are connecting over music (not speeches, not political dissidence, not policy convenings) that this experience is possible. Once again, music paves the way to mutual understanding.
Our second performance took place in an arts school for elementary through high school aged students outside of the city. Aside from the lack of A/C and crumbling walls, this could have been my elementary school. Proud parents filled the room taking photo and video of their kids, whose performances ranged from adorably mediocre to polished and earnest. 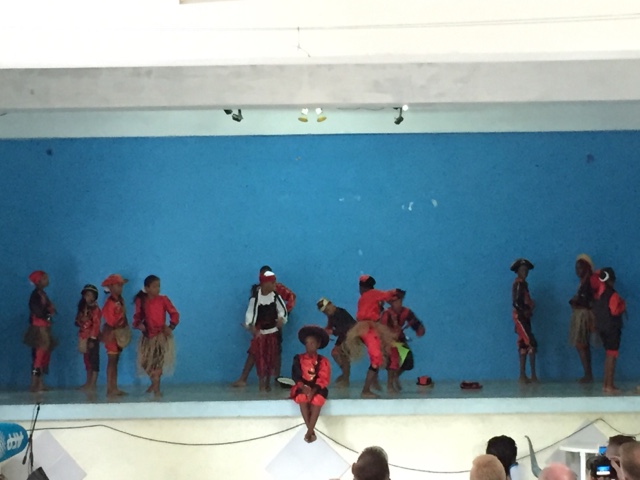 Our third performance was at a block party organized for our delegation in a neighborhood near our hotel. There are so many things to remember about this evening, among them musical performances by us and local residents for each other, andif course lots of rum.
The most memorable part for me came from a seven year old girl named Laura. With my passable Spanish, I introduced Chris to this seven year old as my "novio," or boyfriend. Public references and displays of affection in Cuba are still new and raise eyebrows, but I figured what the hell. After asking about Laura's family and watching her dance with my mom (who became the life of the party), it was time to leave. Laura ran up to me to say goodbye, and then said she wanted to say goodbye to my novio without an ounce of hesitation. She gave us both kisses and asked us to stay longer. This is a child, and indeed a generation, that will grow up knowing that love is love.
Posted by Chase at 7:01 PM