Partnership has been a bit of a buzzword in arts funding circles. I remember first encountering it as an intern at Washington Performing Arts. I had the fortune of some really great mentors there that taught me the difference between a partnership and a "partnership." The latter, I would replace with the word transaction, and I'll explain the distinction.

First, the transaction. Everyone in the arts loves to use warm fuzzy words (well, almost everyone), and most people hate talking about money (well, most people). So, rather than saying "we paid so and so to be here," it can be more comfortable to say "we're partnering with so and so." A great example is media sponsorship. Oftentimes, particularly at a festival, there will be a media outlet credited as the media partner. What normally happens is the media outlet provides discounted advertising to the organization/event in exchange for the title and branding of media partner.

Now I'm not criticizing this model. It benefits everyone. And if you can get one of these discount/barter relationships, you should. But a partnership it is not.

A partnership, to me, is a much deeper collaborative relationship in which new art is happening as a result of shared process. There are a few key elements to a partnership: openness to outside perspective; owning a healthy sense of your own perspective; compromise; being unafraid to experiment; knowing the outcome will be different than you imagined when you started.

Only slightly bragging on some great people I work with, here's a recent example of a phenomenal partnership. This past weekend, 5 organizations came together to perform a never-before-seen version of Carmina Burana. The epic choral work turns 80 this year, and Dr. Thea Kano (Artistic Director) and I wanted to turn this work on its head through the lgbt lens. 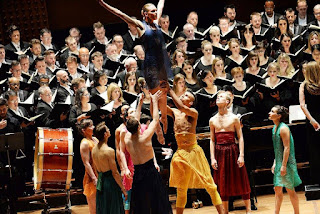 At Alice Tully Hall in NYC, we saw The New York City Master Chorale, the Gay Men's Chorus of Washington, DC, the National Children's Chorus, Gallim Dance Company, and the piano/percussion ensemble Yarn Wire all collaborate on a shared vision of turning Carmina upside down, exposing it as relevant today as ever. Getting all of these organizations to share in a vision, and jump into the deep end together, was a year and a half in the making. What's more - it was better, but also different than I expected.

Of course we knew it would be good. But I suppose we didn't know how "newness" would feel when first tried on for size. Yarn Wire brought an energetic and unexpectedly visual component to their musical presentation. Gallim Dance pushed boundaries that we hadn't event considered with gender-bending and bawdy choreography. The combination of the Gay Men's Chorus and NYC Master Chorale, both of whom are led by Dr. Thea Kano, was like a meeting of long lost siblings for the first time. It wasn't just showing up and singing; it was an emotional moment that had been building for 10 years when Thea first started the Master Chorale. The children's chorus, juxtaposed with the heavy and emotional choreography and chest pumping percussion, brought a sense of innocence that caught me off guard.

We'll be doing something very similar in the coming weekend. We'll swap out the children's chorus for our own LGBTQA GenOUT Youth Chorus in Washington at the Kennedy Center, and we're hiring local instrumentalists rather than a pre-formed ensemble. To see how things change with new elements will be very interesting, and add another layer of newness onto this collaboration.